At the end of this post, you should be able to state ohms law and its limitations respectively.

A German Physicist George Simon Ohm in 1926 made an experiment and observed that for any good conductor, there is a relationship between current (I) flowing through the conductor and the potential difference (V) across it.

Therefore, Ohm’s law states that the potential difference (V) across a metallic conductor at a constant temperature is directly proportional to the electric current (I) passing through it.

Where R is the constant of the proportionality

Equivalently, we can state Ohm’s Law as:

Where I is the Current measure in Amperes (A), V is the Voltage in Volts (V), and R is the resistance in Ohms (Ω)

(Although, this law has its limitations but we will discuss it later after the mathematics below).

Example 1: A potential difference of 100V is applied across a bulb of resistance 30Ω. Find the current passing through it. 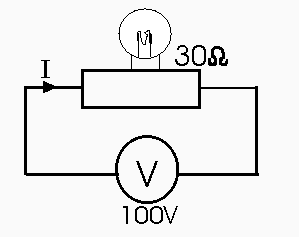 Example 2: What will be the resistance of a bulb consuming electric current (I) of 0.5A when potential difference (V) of 220V was applied across it.

Example 3: Calculate the potential difference (V) that must be applied across a load of 20Ω resistance which will consume an electric current (I) of 1A

Ohm’s law has a condition before the statement could be true. That is, the temperature of the conductor must be constant most importantly. This is why Ohm’s law holds for only metallic conductors.

Metallic conductors usually have constant resistances, so that I is directly proportional to V in them. Despite its name, Ohm’s Law is  not a fundamental physical principle, but rather an empirical relationship obeyed by most metals under a wide range of circumstances.

Materials like: Diodes, transistors, semiconductors (silicon or germanium), neon gas, and acids Ohm’s law however does not apply to such conductors. These conductors limit Ohm’s law because in most cases their resistances change if they are under tension or temperatures.