Resistors in both series and parallel calculations have been some challenges which many people especially students face in their academic course.

In this post, I approached and solved a problem on resistors connected in such network. The solved problem could be similarly or familiar to what you have ever come across. It could be useful for learning how to solve such problem(s) likewise.

Resistors in both series and parallel network combination connections can be broken up into smaller parts that are either one or the other. 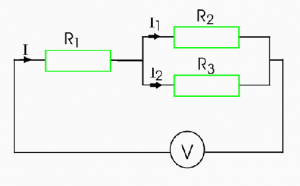 Find the equivalent resistance and the total current, in the network above. If R1=1Ω, R2=2Ω, and R3=2Ω and 100V Pd is across the circuit.

Take the steps below to solve this problem. This steps are successful ways in which you can solve the above given problem.

R2 and R3 are in parallel, the equivalent resistance of the two (Rp) is:

Total current in the circuit: According to Ohm’s law