You might have often come across Resistors and wondered, tried to figure out its value and asked yourself “what is the value of this resistor?” You become frustrated to determining unknown resistors’ values.

In this article, you will get the answers and solutions to those problems. Next time you don’t need to ask or get yourself worried trying to know the value of the resistor which is only painted in sorts of colours!

I’ll teach you in two methods how to determine unknown resistors’ values. The first is by using a DIGITAL MULTI-METER and secondly – COLOUR CODING CALCULATIONS

Before we start determining unknown resistors’ values using this method, we make sure that the resistor isn’t connected to a circuit. This is because in most cases, a resistor’s value varies when connected to a circuit due to some effects of other components in the network. Sometimes they result to be in parallel configuration and thus you may not get the real value. Alright, let’s take the steps below to measure the resistance. 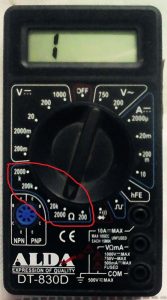 Connect the meter’s testing probes i.e. the cables in this form – Black probe to “COM” and the Red probe to “VΩ” sockets respectively. 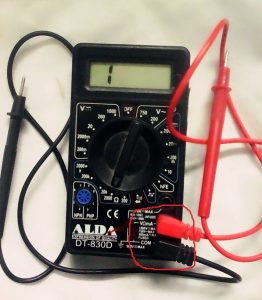 Touch or connect the two probes (red and black) together first. This trick is to measure the resistance of the cables or testing probes (the red and black cables). The value you obtained will be subtracted from the value of the last step ( step 5).

Use the probes with the resistor to be tested on an insulated and dry surface (not held by you). Meanwhile, you can hold it as shown in the picture below. This is because some low resistance may appear from your fingers. Connect the black probe to one of the two terminals of the resistor and the red to the other terminal. 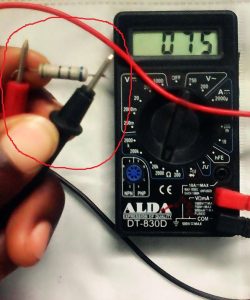 Read the value displayed on the screen. Subtract the value you obtained in (step3) above from this result. The answer you get is the resistance.

This is my favourite method of determining unknown resistors’ values. This method is a straight forward method. This is because you don’t need to disconnect the resistor from the circuit board if it was on the board. But, you will only look at the colours, do some simple mathematics and get the exact value!

Once you get conversant with the colour code of resistors, this will be your simple and effective way of determining unknown resistors’ values.

Let’s briefly learn about the colour codes table (the table is below or skip to it HERE. There are eleven (11) colours use in resistor colour coding. On the table below, black comes first followed by brown, red, orange, yellow, green, blue, violet, grey, white, gold and lastly, silver. They are in order of “1 – 11” 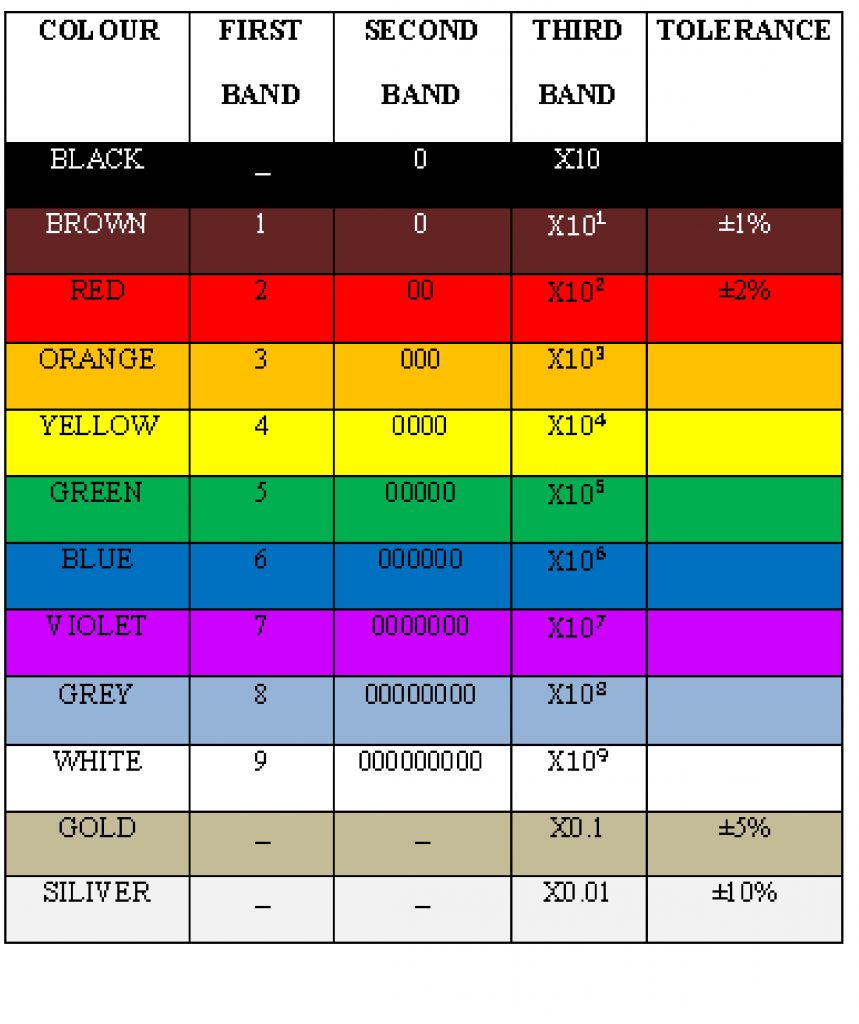 A resistor below has BROWN colour first, BLACK second, YELLOW third, and SILVER fourth, what is its value?

We then use the logic

The shortcut of this method

As stated earlier – write down the digits of the first and the second band colours followed by the zeros of the third colour under its second band. Then, divide by 1000 (if the final figure is up to a thousand i.e. four digits) for your answer in KΩ.

In the case of the resistor above;

What is the value of the Resistor below (BROWN, BLACK, BROWN, and SILVER)

Finally, we now have 100Ω which its value.

If the third band colour of the above resistor was red. We would write 10 and followed by 00. (Red under second band) and our result would be 1000Ω which is equal to 1KΩ

What is the value of a resistor with these colour codes RED, RED, ORANGE, and SILVER