The post “capacitor number code” lists Non Polarized capacitors number codes with their values in Pico Farad (pF), Nano Farad (nF), and Micro Farad (µF) respectively. Also, it teaches you how to calculate the value by yourself for knowledge sake. This is because you may not be close or in position of the number codes and values of the capacitors table which I provide below. Beside, as an Engineer concern you should be able to calculate this type of capacitors’ values.

First of all, I will teach you how to calculate the values of non polarized capacitors which they only have number codes printed on them. The number codes on these capacitors are not their values don’t mistaken the codes with its real value. Why do I need to know how to calculate the value? Is that your question? I have stated the reason why you should above. It is very paramount for an Electrical and Electronics Engineer to have the knowledge of calculating non polarized capacitors value. Please, I recommend you learn this!

How to calculate value of capacitor number code

These are the logics

For example, to read the value of the capacitor below 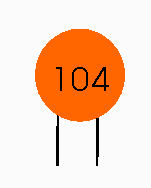 What if the number on the capacitor is 102? What is its actual value?

Note that; some of the capacitors will have a number and a decimal point example 1.2, 2.2, 4.4, etc. Also, some will have the numbers of Tens like 15, 20, etc. When you look very carefully at the top of these capacitors, you will notice that it is shaded black. This indicates that the value is straight away in Pico Farad (pF). Thus, for the ones above; 1.2 would be 1.2pF, 2.2 means 2.2pF, 15pF, and 20pF respectively.

It is also important to know how to convert capacitance from one unit to another different unit. So, in general below are the prefix, symbol, and multiple by respectively of most commonly used capacitor units.

Tips of converting the units to another different unit

With the tips above, you can convert unit capacitance to different units.

However, you might come across of some capacitors with number codes followed by an English alphabet or letter which do not mean units. Letters on the capacitor indicate its tolerance and sometimes company’s series.

If this article “capacitor number code” is interesting and educative to you, don’t forget to share with your family and friends at the end.

The table below is the Capacitor number code and their values in pF, nF, and µF respectively.